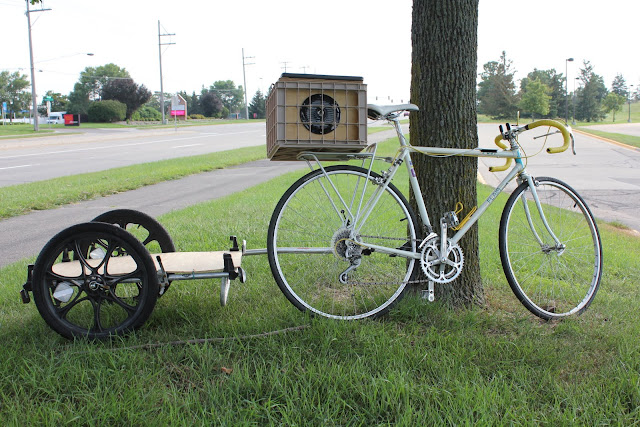 Today, Garden's of Eagan (an organic farm which supplies my co-op with a lot of their produce) put on an event of touring the farm and buying local (Farmington) foods.  The farm is about 35 miles from Uptown Minneapolis, and our plan was to leave at 10, leaving 3-4 hours to bike down, tour the farm and bike back in one day. We loaded up with a burley trailer (thanks Jim) and my solar-powered bike stereo (made for the bike across Iowa this year).

Well..... we didn't end up leaving till about 11:30, and (optimistic as we were) didn't write down very clear directions to get there.  About 12 miles into the trip we got lost the first time (around the airport and had to backtrack a few miles.  Another 7 or so miles later we (again) realized we had taken a wrong turn which had sent us 5 miles in the wrong direction :/  At this point, with another 15-20 miles to go, we realized we weren't going to make it to the farm before the event was over (especially hauling 40 extra pounds between the trailer and the stereo) and sadly, sat under a tree by this Lockheed Martin to contemplate our situation over dry bread and an apple.  While sitting there being sad about our situation we noticed a Granite City restaurant/brewery across the street.  Granite City advertises that their beer is locally brewed even though they are a Midwestern-wide chain restaurant. There are signs on the doors of "Support your local brewery".  We decided to check out this self-proclaimed local beer.  We ordered a few drinks and an excited waiter came over and (because we were really sweaty and bike-ish in general) told him we had biked here from Minneapolis.  He was really excited about this and it gave us the idea that restaurants should offer some kind of discount to people who arrive by bike.  This would help both the patrons of the restaurant (they would be healthier) and the restaurant itself (they wouldn't have to provide as much parking, and would probably sell more food and drinks because people would be more hungry and thirsty after biking :) )  We asked him about the beers we had just ordered (because the building wasn't nearly big enough to be brewing 5 different kinds of beer).  He explained that the beer was actually brewed in a central location and just fermented in each local Granite City location.  While this is better than some options, it certainly shouldn't be labeled as "local".  These labels can be very misleading and frustrating :/
Needless to say, we didn't stay for a second semi-local beer, and instead headed back to make a truly local meal.

(Those of you who were thinking about going and couldn't, its really for the best, next time Garden's of Eagan! We will find you! Ha, sad.)

SOLAR POWERED STEREO:
The design of the stereo is from an instructables: http://www.instructables.com/id/Solar-Bike-Stereo/ with some modifications to fit my bike and such. I haven't tested how long it last continuously playing, but on the week we biked across Iowa with it (at least 5 hours of riding every day it didn't need any extra charge). It is a 5 watt solar panel (about $50 on Amazon) which trickle charges a 7amp battery and that feeds the speakers/amp. The entire thing can be switched on with the black switch in front and has audio and usb cable holes on the front to plug and charge my Ipod which is attached to the top tube of my bike with industrial velcro. Its heavy (about 20 lbs) and fits in the milk crate on the back of my bike.