DAY 23_SOLAR AT THE STATE FAIR

The past few years the Minnesota State Fair has put together a huge exhibit called the Eco-Experience.  It has its own building and is run entirely by volunteers (about 400).  The Eco-Experience has exhibits on solar power, wind power, local foods, transportation, composting/waste, water quality...They get people to volunteer by offering training sessions in each area.  People who want to to learn more than they could just walking through the exhibits can go to a 3 hour training session and get a more in-depth understanding of the systems and then volunteer for at least one shift at the fair (free ticket!).  Anyway, so solar power has been explained to me about 1,872 times and I still can't say I really get it so I volunteered for this thing.
The kinds of people who volunteer for something like this are coming from ALL over the place, everyone has their own reasons to learn about solar power, but in most cases people are recognizing that solar power is a HUGE upcoming industry and people want in on it.
Of course, the day I volunteered was one of the crappiest days of the fair, cold, rainy and overcast.  So much for solar power :/  I was working outside where they had a bunch of panels hooked up to various things so people could see up close hows things looked and worked.  With off and on sprinklings of rain we still had a small steady stream of people.  What was interesting was when the sun would come out lots of people would suddenly flood into the area.  I think there must be a perception that solar power only works in full sun.  I had a few people come up to me and (noticing that our gadgets were still working with overcast skies) would ask how they were working on such a crappy day.  The solar panels still capture light on overcast (even pretty dark) days, but are significantly better in full sun.  This was demonstrated by the largest array they had (about 8 3'x5' panels) which was hooked up to a wattage meter.  Watching the meter move throughout the day (from dark rain to full sun) was interesting.  The highest wattage the panels were producing was 750 watts and the lowest I saw was about 30 watts.  That's a pretty big range.  The wattage per square foot was ranging from 6.25 watts/sq ft (750 watts) to only 0.25 watts/sq ft.  A pretty average peak wattage from what I understand is about 8 watts (peak) per sq ft. 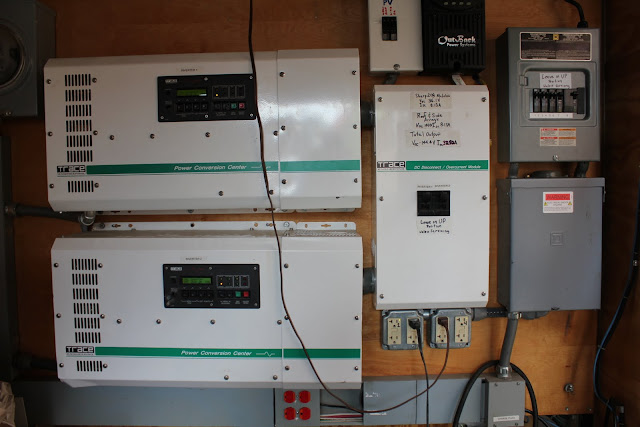