For the last few posts I would like to think back and summarize how my life has changed during this project and what I have learned...

I'll begin with what was both the most difficult part of this project, and the most enjoyable- food.

Looking back, having started the project in the middle of August it should have been REALLY easy to find local foods.  The middle of August in Minnesota is just about the peak of local food production, almost all vegetables can be found locally grown.  However, despite this plentiful bounty of local produce it was really difficult to get a handle on what things I could prepare with it using other ingredients (cheese, flour, oils, dairy....).  It took a while to seek out and find local milk, local flours in bulk, local butter in a compostable wrapping.  I compromised on the cheese, because although there are many local cheeses available they are all wrapped in plastic.  This became the only item I bought in packaging.

After the first few weeks of the project I had figured out where to get most of the ingredients I needed for cooking locally and without packaging.  Many of the things I had a habit of cooking with however; olive oil, rice, avocados, soy sauce and many spices were no longer available.  I had to learn to cook many dishes that normally I wouldn't have prepared for myself.  Potatoes with mixed vegetables became a staple.  I learned to cook all bread products from scratch- loaves of bread each week, muffins, tortillas, crackers.  Made a lot of homemade pasta sauces and tried pizzas of all different kinds.  Below is a summary of many of the foods I made out of local ingredients during 100 days: 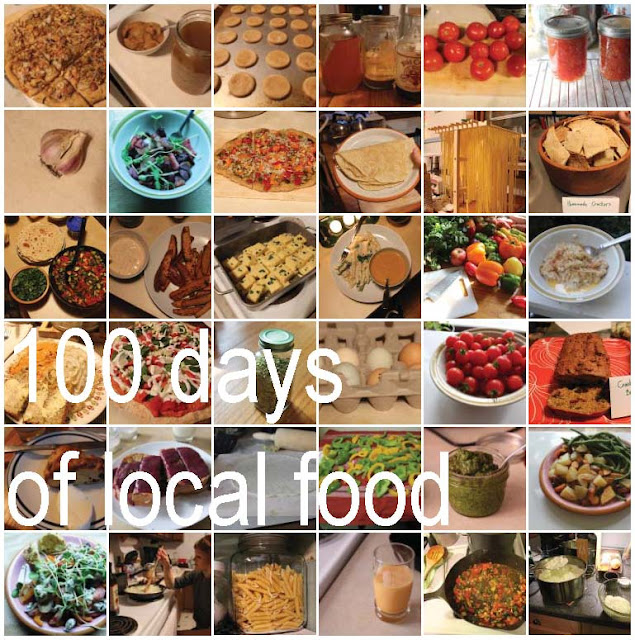 I had the idea to begin growing my own food indoors to have a food source after the growing season started to die down.  On day 1 of the project I planted a variety of of vegetables: tomatoes, bell peppers, cucumber, beans, onions, greens, and herbs to see what would grow with the available artificial light I had.  Having never grown a vegetable in my life I learned about gardening by watching my little sprouts slowly start to become recognizable vegetables.  I made plenty of mistakes growing the first few batches of seedlings and the grow table has gone through a few evolutions of goals.  My first idea was to have a variety of vegetables and keep whatever grew the best (not knowing if anything would have enough light to fruit).  After accidentally scalding the majority of my first seedlings (I left the plastic seed flat cover on too long), I began to reevaluated what kinds of plants would be most practical to my situation.  Because most vegetables are able to be stored (whether dried, frozen or canned), I decided to focus on growing what couldn't be stored very well-greens.  I started to grow a lot of microgreens which grow quickly and can be harvested after only about a month.  This was going fairly well until I was infested with aphids. My continuing battle with aphids was one I didn't know I was going to have to have with indoor plants.  While it was easy to pick the aphids off of most of the single plants, they were almost impossible to get rid of on the densely planted microgreens.  I ended up having to get rid of a lot of the greens and went back to focusing on growing some vegetables.

Around day 85 I got my first flowers on vegetables and realized that without insects and wind to pollinate plants I would have to play the role that nature usually does.  After 90 days I finally have my first fruiting plants with a little bell pepper growing!  This is really exciting because I was starting to doubt that any vegetables would have enough light to produce fruit.

My new plan for the grow table is to make a habit of planting a few new vegetables every month, so I can have a continuous supply of at least some fresh produce.  Below is a timeline of the grow table over 100 days:


Lastly, it was interesting to explore restaurants that advertised themselves as local food focused.  I found that there were many exceptions to their 'localness'.  While 'local' dishes are offered year-round, they are only truly local when the food is in season.  Many restaurants I ate at didn't offer many ( or any) local wine/beer, and all used olive oil instead of sunflower oil.

I learned to can, dehydrate and blanch vegetables for preservation, and tested how long I could store potatoes, onions and garlic.  I ate only preserved foods for the last month and found that it would be really difficult to eat nothing 'fresh' for the 8 months of the year that fresh local produce is not available.
Posted by Molly Eagen at 3:44 PM No comments: