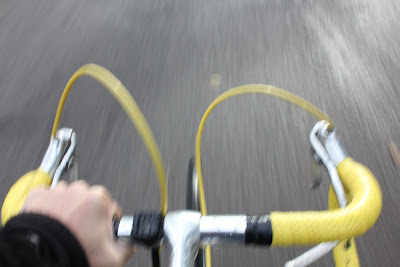 45% (19.15 gallons) of every barrel of oil (42 gallons) is gasoline.  This means that the petroleum created to run our cars is by far the largest single use in each barrel extracted from the earth.  While transportation isn't the biggest total energy user in our daily lives, it IS the biggest petroleum user.

While I biked quite a bit before this project started, it makes a big difference to be riding every time you want to get around.  Without using cars and buses as back up transportation for cold or wet days, bicycle commuting takes on an entirely different face.  I think a lot harder about whether I really NEED to go somewhere, ended up staying home many days that I didn't have classes instead of going somewhere to work.  I started to modify my schedule so that I could ride around with other bikers and didn't have to bike alone (especially at night).  Unlike driving, the routes taken depend on the weather and the time of day.  While bike paths in Minneapolis are best during the day and during rush hours, well-lit main streets were a better option for late night rides home (even with traffic).  As soon as it gets snowy and icy, I had to factor in another 10 minutes of riding time.  Bicycle commuting changed the way I dressed.  While it is easy to bring a change of clothes, I was often only going somewhere for a few hours and it didn't seem worth it to carry.  Consequently, I pretty much wore the same few things for at least 2 months once the temperature started cooling off.

Workout? Kind of.  There is so much starting and stopping that it isn't really much of a workout compared to the 30 minutes I would have spent on a treadmill.  Yes, obviously its better than sitting in a car and still is nice to get out and be outside for an hour or two a day.  I felt much more connected to the changing of seasons and it was really nice to watch the sun rise every morning while biking down the greenway.

My conclusion: Biking is absolutely the best way to get around while the weather is good (or even decent).  For those brave and bad ass enough to keep going as the temp drops under 20 and the ground is covered in ice (as 1/3 of Minneapolis bikers do), I admire you, but would rather get on a bus December through mid March.

Below is a graphic of the miles I biked each day for 100 days:  There starts to become a pretty clear pattern at the end of project when it starts getting colder I only bike to campus and back on days that I need to, whereas in the beginning of the project I was much more willing to run errands and take longer trips around the city.