This summer I am a research assistant at the Center for Sustainable Building Research (CSBR).  One of the projects I've been working on is a proposed greenhouse attached to a high school in a small agricultural community in western MN-Graceville.  Today we were scheduled to present our final proposal to the school board and, consequently, had to travel the 190 miles out there.  After considering my options (driving-3.5 hours, biking-15 hrs 43 min, walking-2 days 9 hrs) we decided it was best to travel by car only the few times it was necessary for work :)  This brought up an interesting consideration, however, which was how the project will affect the lives of those surrounding me, especially my roommates.  I live with 2 roommates in a house.  While both of these fabulous ladies have expressed their interest in incorporating some of the things I'll be doing into their lives such as composting, I certainly can't expect them to be living exactly the way I am (creating no waste, using water from a rain barrel and never turning on the lights).  After talking to my committee about this issue we decided it was best to focus on the spaces in the house which I am personally occupying, meaning: If I walk into the kitchen which has someone in it, I won't be turning off the light, however, if I was in the space alone, I wouldn't have the light on.  In the same way, it is unrealistic (and not the point of the project) to refuse to eat food that doesn't meet my criteria at another person's house, and so on.  When making meals for other people at my house, I will be following all of my 'rules'.  Whenever possible I will be following the criteria I have outlined.  In a world without cheap oil, it is likely that telecommunications will be greatly improved and utilized much more frequently than now.  We've already begun to see a shift in telecommuting options, and it is a recognized step for businesses and universities to facilitate this type of communication to save energy/dollars their employees would otherwise use traveling.

I want to share a little bit about the greenhouse project because the process of learning about the possibility of growing food year-round in Minnesota has inspired a lot of the food-related items of this thesis.  The Graceville community initiated the project after creating a community garden run by students a few years ago.  The need for fresh and inexpensive produce in these small rural communities is HUGE.  There is only one grocery store in Graceville and, ironically, even though it is an agricultural community, the store doesn't stock hardly any fresh produce.  Small grocers in these communities cannot compete with the supermarkets at Walmarts and other large, nationwide stores even though these stores are located hours away.  Because most residents need to travel the distance to the a larger town anyway at least once a week to get other supplies, they do their grocery shopping outside the community.  The small, community grocery store in Graceville, consequently, has a lot of trouble staying in business.  They actually refer customers (with permission of the school) to pick fresh herbs out of the community garden in an effort to supply their residents with healthy, fresh vegetables.  With this issue in mind, Graceville's vision is to build a greenhouse on the high school which can supplement the school's lunch program with fresh, local produce, while educating students (who are often quite disconnected from growing food to EAT rather than sell) where food comes from and what goes into a healthy diet.

The team working on the greenhouse was made up of; Virajita Singh (Senior Research Fellow at CSBR), Jess Roberts (Energy Consultant-Designed Solutions LLC), and myself.  Our proposal was a 44'x16 ft greenhouse on the south facade of the building.  316 sq ft of growing space was created in 2' raised beds (beds allow for maximum production as opposed to pots), and an additional 116 sq ft of growing space in 1'x4' hanging planters above the beds.  Jess Roberts came up with three scenarios for heating options.  They included a combination of the following: (1) Solar Thermal,  (2) Diverting hot air which is currently being exhausted out of the building into the greenhouse (this air is rich in carbon which is good for plant growth), (3) geothermal system, and (4) a biomass gasification system which could be a possible collaboration with the University of Minnesota-Morris.  The profile of the greenhouse is maximized to receive the most solar heat and light gain at the shortest and coldest time of the year-the winter solstice (Dec 21).  The angle on the front is 68 degrees which is perpendicular to the sun angle at noon on Dec 21st allowing for the least loss of light and heat due to the reflection of the surface.

Below are images and drawings of the proposed greenhouse: (clicking images opens a new larger window) 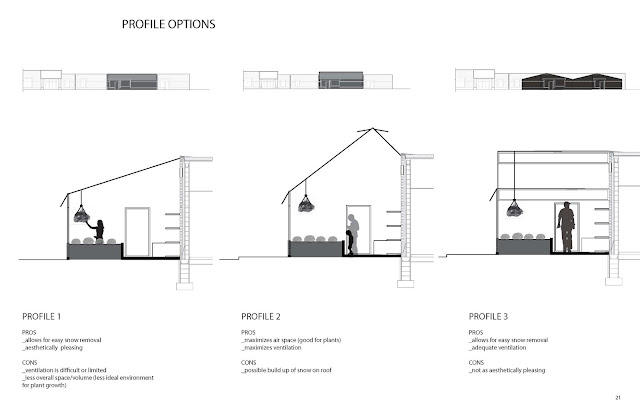 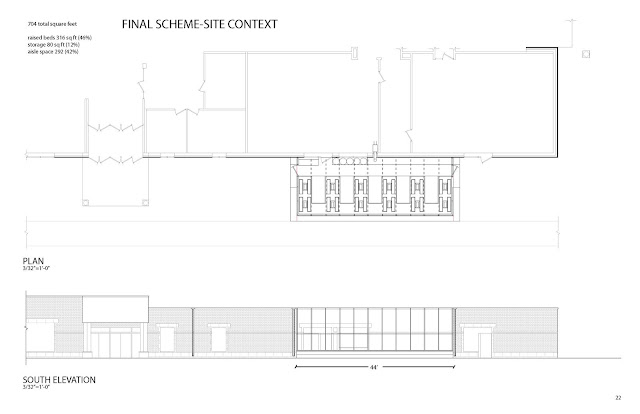 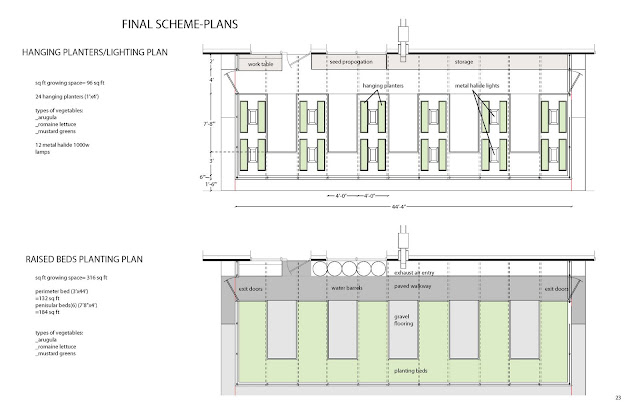 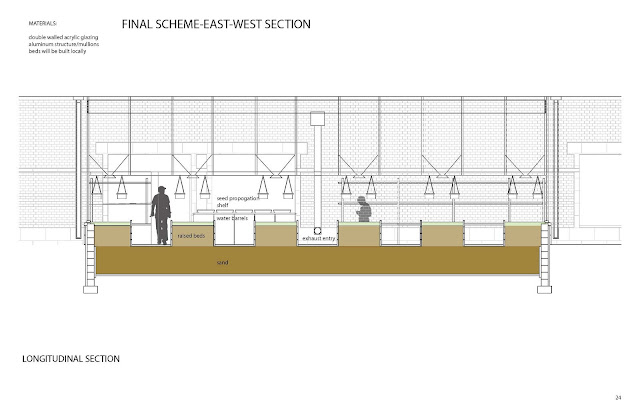 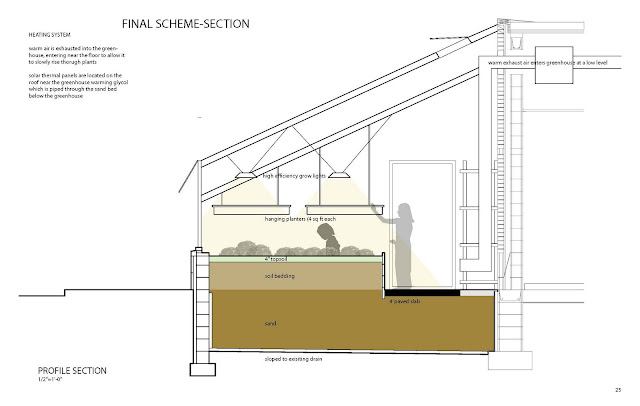 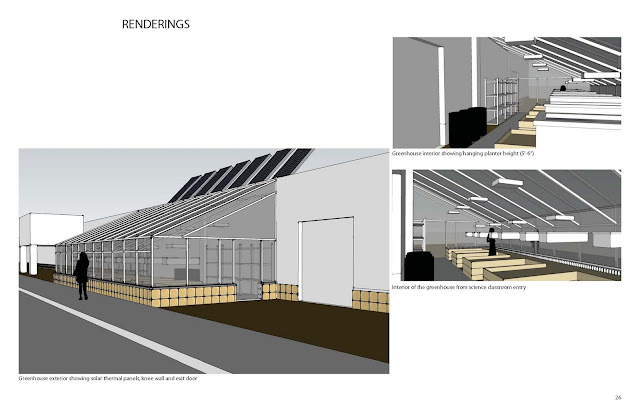 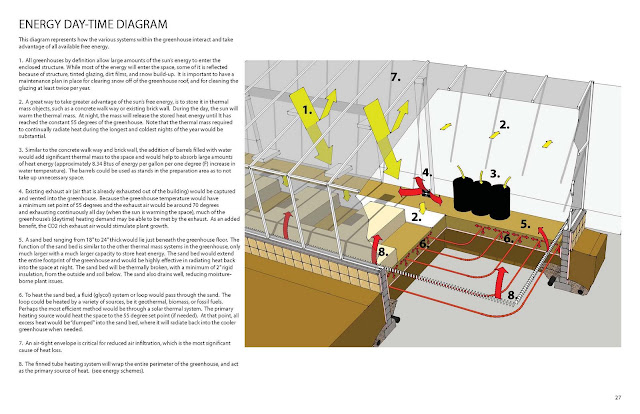 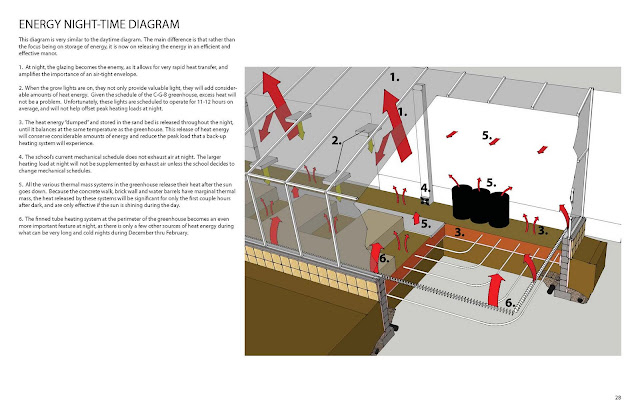 On another note, I woke up feel really drained this morning, and, of course, couldn't have coffee either.  Virajita, who has read quite a bit about the transition into a raw-foods diet (which is similar to what I'm doing), mentioned that when you go from eating processed foods and lots of sugars (a typical American diet :( ) to one which is only organic vegetables your body goes through a week or so of a kind of detoxing.  Because I don't drink coffee everyday and already was eating only a limited the amount of 'boxed' foods, I was surprised to be feeling so drained.  While the next few days without caffeine and processed food will probably be tough, I am fueling my body with much more direct nutrients now than before (I'll expand on this later), and hopefully will be feeling totally awesome in a week or so, time will tell!
Posted by Molly Eagen at 9:34 PM