DAY 19_MY OTHER BIKE IS A HUMMER

While all of the food, drink and health products I'm buying are local, most of them are coming from the co-op I live by or the farmer's market, meaning they had to be transported (even the short distance) to each of these places.  A friend pointed out that the more products I could actually buy AT THE SOURCE the more I would have an understanding of what goes into making those things.  Even things that are made "locally" often have many other added ingredients which come from far away.  This is an excellent point, and I figured I'd start with one product I was particularly suspicious about ingredient sourcing-beer.  :)

Our big destination today was a tour at the Summit Brewery.  Summit gives tours every Tues and Thurs at 1 and on Saturdays (but you have to reserve).  The brewery is located along the bend in the river between Minneapolis and St. Paul-an 11.6 mile bike ride from Uptown.  The ride was really nice because we could take the Greenway which connects to the Mississippi River Pkwy the whole way there.  Pulling up on our bikes in this industrial area we were doubting we would find bike racks and were about to go find a street pole when we found racks right next to the front door!  Yeah! The best part about biking is you almost always get the best parking spot available.
It became clear when they were explaining the ingredients that go into their beers that even "local" beers are not necessarily local.  Obviously all the brewing happens here but the ingredients could really be coming from anywhere.  For example, they are doing an series of beers called "Unchained", the beer in this series this year is a Belgian Style Golden Ale.  In order to make an authentic tasting Belgian beer they really have to get ingredients (malt, hops) from Belgium.  Many of their other beers are likely quite a bit more local than that one.  The original Summit Extra Pale Ale is their flagship beer (and the best) and all ingredients in that beer are at least grown in the US, if not the Midwest.  Stick to the local stuff Summit, you do it better that way :)

The tour included seeing the huge fermenting room, bottling room and 3 free beers for everyone.  Seeing the bottling room left me with questions about if they reuse bottles like they do kegs.  I interrogated the tour guide as he was passing out drink tokens and he said he didn't know of any breweries in Minnesota that had a bottle-return program.  That Wisconsin breweries used to do this, but he wasn't sure even they did anymore.  It would make SO much sense to do something like this.  It would save money for the breweries, for the customers (either as a refund or in less cost from not having to buy more bottles).  Without even considering the energy intensive process of making hundreds of thousands of glass bottles every year, this seems like an obvious move breweries could make.  We were further disappointed to find that they didn't sell any growler-size beers anywhere.  Most breweries I've heard of let you buy growlers of beer and you can return the bottle or refill it when you are done for a refund.  Anyone know of breweries that do this in the Twin Cities? 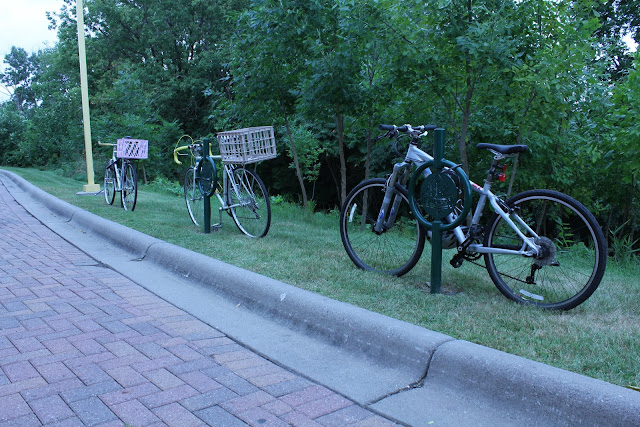 Our next stop was Izzy's Ice Cream on Cleveland and Marshall.  Izzy's is great, a local company...but are their ingredients local?  We interrogated an unsuspecting worker who ended up knowing quite a bit about their ingredient sourcing.  It turns out they get the "base" for all of their ice creams from a place just across the river in Wis.  I forget the name of the town (started with an M....) but the majority of the ice cream is this base.  After that, they get ingredients that they can find locally as much as possible.  Both the workers there knew some of the sourcing for specific flavors which was great.  It is fairly easy to guess what flavors could be totally local after searching for local foods for 3 weeks (the berry flavors were safe for sure)  I got a maple nut with a little raspberry...The mistake I made, however, was I got a cup! Oh god! I totally forgot, everyone else got cones and it wasn't until we all sat down together that I realized my fatal flaw.  Waste.
The highlight of being at Izzy's however was a bumper sticker we spotted on an SUV that pulled up next to us.  "MY OTHER CAR IS A BIKE".  Wait. What? Your OTHER car?  Is a bike?  Is that supposed to be a good thing?  Is that any different than having a bumper sticker that says "I own a bike"?  I dunno, I don't get it.  Congratulations?  My other bike is a Hummer, or...um...whatever.
Total of 26.13 miles logged in 2 hours and 14 minutes round trip.  I've officially gone 200 miles in 19 days!
To reward ourselves we decided to make a breakfast dinner.  On the menu:

This was only the second time I've had meat during this project so that was really exciting, super great meal. We cooked the entire meal by candlelight and the worms got the leftovers. Thanks for playing no-oil with me guys :) 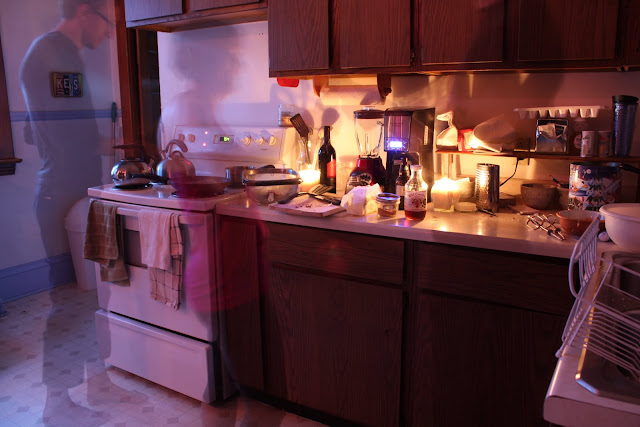 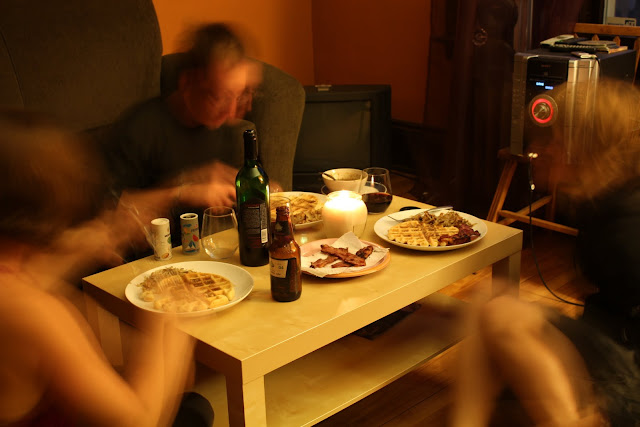 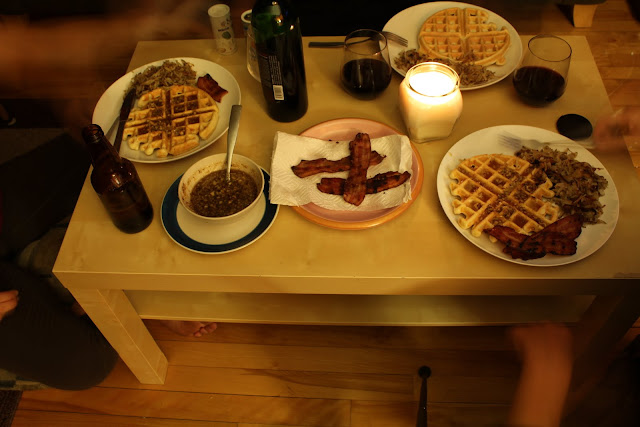