STORING FOOD:
Its getting colder here, and while that is sad because we have all been wearing jackets and boots the last few days, it is sadder because I am realizing how many foods that I eat everyday will start to disappear soon.  I'm starting to freeze foods (and wishing I would have frozen some foods that are already gone).  I made a big batch of pesto today and froze it in a muffin tray.  After freezing I dipped the pesto tray in hot water to loosen the edges and put the 'pesto pucks' in mason jars in the freezer.  I'm working on freezing and dehydrating a bunch of local pears I found at the coop the other day. 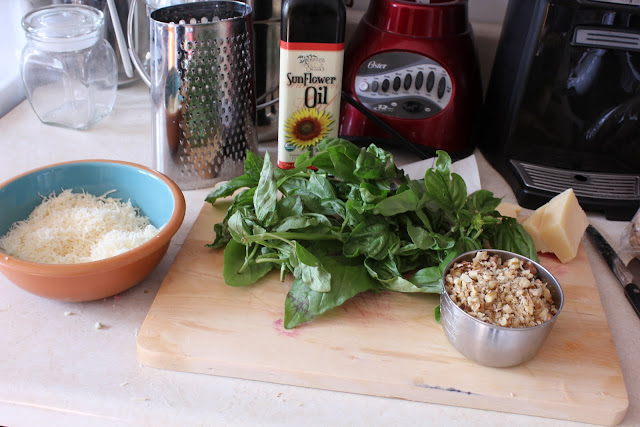 WATER:
I tried heating my water in a 5 gallon solar camp shower bag I have today.  Filling up the bag (using my weekly surplus water) was the first thing I did when I woke up this morning, however I went out to the porch only to find that it was completely shaded. The porch on our house is on the west side of the house :(  It takes at least 3 hours to heat the water in the bag to shower temp 95-100 degrees, and full sun.  It wasn't until noon that the sun finally peaked over the house and started landing on the porch.  After this I had to wait another 3 hours to heat the bag.  Although it is was still a pretty warm day, there was only partial sun.  I dumped the water into a 5 gallon bucket after it had heated for 3 hours.  It was kinda warm.   Definitely warmer than room temperature, but not hot.  So afternoon long shower's it is.  I used a mason jar to scoop water out of the bucket and pour over my head to wash my hair.
FARMER'S MARKET:
This morning I went to the midway farmer's market.  This market is smaller than the St. Paul market, but also has local foods and is only 3 miles away (as opposed to an hour bike ride).  I was surprised to still see some greens (chard and Chinese spinach).  I saw apples for the first time and got a bunch.  I also saw a guy selling cheese....of course, all his cheese was wrapped in plastic.  I asked him if it was possible to not wrap it in plastic and he looked really confused.  After some explaining he started to understand what I was asking him-avoiding plastic waste.  However he didn't seem to think there was any possible way he could transport the cheese without plastic.  He kept asking me "Well... how would I do that?  I don't see how I could do that."  I didn't have any suggestions for him, because, well, I'm not a cheese maker.  Pretty disappointing.  I haven't found any way to buy cheese without packaging so far.
So far I have just been collecting the cheese wrappers. I've only bought cheese twice so it isn't much waste, but I have to wash it because there is always a little cheese still stuck to the wrapper and I don't want it to mold as I collect it. Although I could keep doing this I think it would be more interesting to start to identify what waste I am accumulating and find ways to try and change this almost unavoidable waste.  It makes me think of the new waste system in (Norway? Sweden? I forget)  Basically, they get a yellow waste bag every week and aren't allowed to create more waste than fits in the bag.  The trash service won't take anything else.  Because of this, people began just leaving extra packaging waste that they didn't need in the stores.  For example, they would just leave the cardboard box that toothpaste comes in on the shelf.  After a while, stores began to realize that they couldn't be responsible for getting rid of that waste (because they had waste restrictions too) and started working with product suppliers/manufacturers to create products without extra waste.  People really do have the power to change these things, because ultimately, manufacturer's are forced to respond to our needs (especially in cases like this).   I've thought about doing the same thing with cheese.  I have a plan for cheese-packing rebellion:
(1) I got the contact information for the the lady who is in charge of the deli dept at the co-op, I'll explain my concerns to her first and see if they can find a way to package cheese in compostable plastic or paper of some kind.
(2) I'll buy the cheese in the packaging but ask at the check out if they will take my waste (even though I am creating waste this way, if enough people starting doing this they would start to realize the desire people have to not accumulate plastic wrap waste).
(3) If none of the the other options work I will take the cheese out of the packaging as I leave the store (trash by the door).
Cheese plastic is really the ONLY food that I can't buy due to the packaging, as far as raw ingredients go.  Obviously things like yogurt, sour cream, cream cheese I can't buy because they come in plastic tubs. But the cheese seems like a an easy fix, they already use compostable plastic for a lot of things a the wedge.  More details later on the saga of cheese waste...
Posted by Molly Eagen at 9:08 AM