DAY 31_TEFLON (THE PETROLEUM IN YOUR PAN) 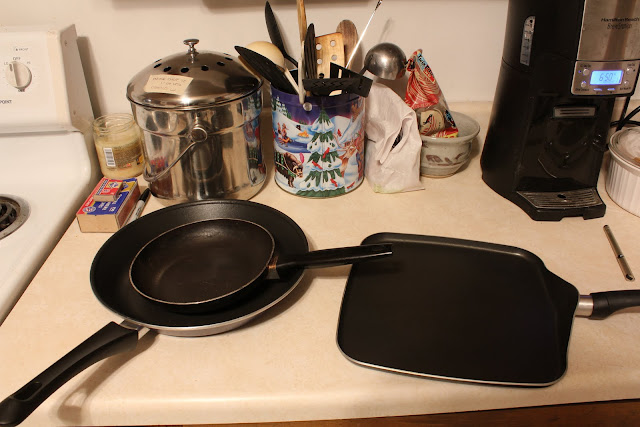 Teflon (the non-stick coating in pans) has been a subject of some controversy in our house lately ;)-being a petroleum product, I think it deserves some attention here....

I'll use this nice introduction from www.wisegeek.com/what-is-teflon.htm:

"Teflon as been a familiar name for decades.  Invented at DuPont's Jackson Laboratory in 1938, Teflon is actually a substance called polytetrafluoroethylene (PTFE), which is considered to be the most slippery substance that exists.  Its nonstick properties have transcended the kitchen, and is widely used in other areas including aerospace, communications, electronics, industrial processes, and architecture. Teflon changed the plastics industry forever, and DuPont has received numerous awards and recognitions for its contribution to the field of man made polymers.

Its likely that just about every home in America has Teflon somewhere.  As a carpet protector, it repels liquids so that nasty spills on carpet can be wiped up clean without leaving a stain.  The same technology can also protect the fabric on furniture.  It is also used as an automotive lubricant, and even protects bulbs from shattering.

There are numerous industrial uses for Teflon as well, in areas such as semiconductor, manufacturing, pharmaceutical and biotech manufacturing, and industrial bakeware.  Eyeglass wearers may even have Teflon on their eyeglass lenses.  In the area of personal care, it is used as a fingernail protector, and even in a line of haircare products.  Teflon is applied to pots and pans in a multi-step process that helps ensure that the material stays stuck to the surface.  The first applied layer includes a sticky molecule that helps adhere the non-stick Teflon to the surface, this is followed by an application of non-stick surface only, and the final coating is a combination of non-stick Teflon with other hardeners."

There are varying opinions about the safety of Teflon for the environment and communities located near manufacturing plants:

"The Environmental Protection Agency (EPA) asserts that DuPont has purposely withheld health hazardous information regarding Teflon since the early 1908's.  Petroflouronanoic acid (PFOA), a chemical used to produce Teflon, has been appearing in blood samples of people world wide.  DuPont, slapped with approximately 300 million dollars in fines, has agreed to pay a 108 million dollar lawsuit brought about by residents near one of its company plants as elevated levles of PFOA's have been found in surrounding drinking water supplies. "
(http://whatscookingamerica.net/LindaPosch/ToxicCookware.htm)

While causing environmental air/water quality problems is one things, its daily use is another...All plastics are in their most stable state when they are solids.  While they off-gas a small amount as solids, once they are heated they begin off gassing quite a bit more.  A new car smell is actually the plastic elements and other chemicals (in seating fabric etc...)that are being off-gassed as they sit in the hot sun in an unventilated place (closed car).  The same is true with Teflon cooking pans.

There is signicifant evidence that the fumes are toxic enough to kill birds:

"In cases of "Teflon toxicosis," as the bird poisonings are called, the lungs of exposed birds hemorrhage and fill with fluid, leading to suffocation.  DuPont acknowledges that the fumes can also sicken people, a condition called "polymer fume fever." DuPont has never studied the incidence of the fever among users of the billions of non-sick pots and pans sold around the world.  Neither has the company studied the long-term effects from the sickness, or the extent to which Teflon exposures lead to human illnesses believed erroneously to be the common flu.  The government has not assessed the safety of non-stick cookware.  According to a Food and Drug Administration (FDA) food safety scientists. "You won't find a regulation anywhere on the books that specifically addresses cookwares," although the FDA approved Teflon for contact with food in 1960 based on a food frying study that found higher levels of Teflon chemicals in hamburger cooked on heat-aged and old pans.  At the time, FDA judged these levels to be of little health significance.

Of the 6.9 million bird-owning households in the US that claim an estimated 19 million pet birds, many don't know that Teflon poses an acute hazard to birds.  Most non-stick cookware carries no warming label.  DuPont publicly acknowledges that Teflon can kill birds, but the company-produced public service brochure on bird safety discusses the hazards of ceiling fans, mirrors, toilet, and cats before mentioning the danger of Teflon fumes.

As a result of the new data showing that non-stick surfaces reach toxic temperature in a matter of minutes, EWG has petitioned the Consumer Product Safety Commission (CPSC) to require that cookware and heated appliances bearing non-stick coatings must carry a label warming of the acute hazard the coating poses to pet birds.  Additionally, EQG recommends that bird owners completely avoid cookware and heated appliances with non-stick coatings.  Alternative cookware includes glass, stainless steel and cast iron, neither of which off-gases persistent pollutants that kill birds."

While there are conflicting opinions about the temperature at which the Teflon fumes begins to become toxic: Wikipedia sources say 260 C degrees is when it begins to deteriorate and at 350 C it decomposes.  Other sources say the Teflon begins to off-gas at lower temperatures.  It is likely that these numbers are determined by what is a 'safe' level of toxins to be in the air without have negative side effects.

No matter what the true off-gassing answer is, the point remains that Teflon is a toxic chemical, and not something that should be on objects that are INTENTIONALLY heated-cooking pans.

Lastly in ALL studies done on Teflon which I have encountered, it is stated that Teflon is safe when 'properly used'.  How to 'properly use' your pan is either not included or in the fine print.  Deeper research (and personal experience) reveals that Teflon is quite destructible.  It is not intended to be coming off the pans, and when it does, it becomes an even greater hazard than inhaling possible toxic fumes.  EATING Teflon flakes isn't exactly something you want to do.

"One of the major disadvantages of using Teflon cookware is that it must be treated very carefully or the non-stick coating can be marred or destroyed.  Teflon pans should never be used with metal utensils.  If you tend to cut meat or vegetables directly in the pan, steer away from using Teflon!" (http://tuberose.com/Teflon.html.)

Basically, if you own Teflon pans, do not:
_scrape the food off the pan
_cut the food on the pan
_store the pan anywhere it can be scratched in any way (stacking pots)
_leave the pan in the sink where other dishes (silverware) can scratch it

Ultimately, with other options of pan materials available to us (cast iron, ceramic, stainless steel and aluminum), why risk possible health problems for a little added (non-stick) convenience?

I have been forced to abandon a multitude of habits and methods of doing things during the course of this project that I consider to be more convenient: turning on tap water, turning on a light, taking a long shower, buying personal care products from anywhere in the world that last for years, getting in a car, picking up pre-made food in boxes...While only some of these habits DIRECTLY negatively affect our health and lives, many indirectly do as they effect the environment in which we live.  Finding alternatives for these ways of life is often difficult, however, finding other methods for at least the habits which are direct risks to our health seems like a good starting point.

Petroleum use has certainly increased the 'convenience' of our daily lives, but at what cost?  At the risk of sounding preachy, it has been an amazing experience up to this point to slow down and spend time doing some of the everyday tasks that I normally rushed through.  Doing laundry, taking a long time to make dinner (because it takes a long time to make everything from scratch :P), and commuitng by bike are all tasks which, on one had eat time out of my day, and on the other hand allow me to appreciate and understand where many of the things I originally took for granted are coming from, and the energy it takes to accomplish these tasks for my 'convenience'.

As my chair, Tom Fisher puts it, we need to redefine what the word 'scarcity' and 'abundance' really mean in our society.  What is it that we value and brings us happiness in our lives?  Is our current definition of 'abundance' representative of the way we really want to be living?
Posted by Molly Eagen at 12:48 PM