DAY 71_YOU'RE ALSO BUYING THE CONTAINER

My collection of containers has been slowly but steady growing throughout this project.  Every couple weeks I seem to find a few items that come in bulk or reusable containers that I wasn't aware of before.  Many items we typically buy in a grocery store come in glass containers, but before this project I never though twice about recycling containers when their contents were empty, they simply didn't mean anything to me anymore.  The fact is, whatever we are buying we are PAYING for that container as well as the contents inside it.   I have begun to feel much more connected to the containers I am buying because I have actually purchased them in the form of; mason jars, growlers or milk containers. 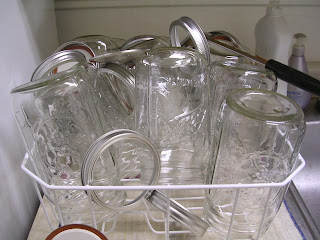 I have some old jars that belonged to my great grandmother which she reused over and over to store foods that she made or bought.  They are decorations, as they may be in other people's homes as well.  They are just jars like the ones I buy, but because they are old they have a value that I don't associate with my new jars.  By actually placing value on the containers, whether nostalgic or monetary- I am much more aware of the waste I am avoiding creating.

In the case of the mason jars which are less than $1 each, I may not be paying much more for the container buying it separately and getting bulk foods than I would be buying an item in a glass jar similar to it.  In fact, because I only have to buy the container ONCE, the cost really pays for itself quite quickly.  The milk jugs and growlers are a bit different.  Each time I return a milk jug or growler I am refunded a deposit for the empty container and make a new deposit on the new container.  The deposit for my milk jug is $1.50 and the growler is $4.   In this way, I am really not paying for the container, but simply renting it.  By placing only a small monetary value on containers they suddenly become much more precious.

In our house, if a few of us end up buying the same milk we make sure to keep the number of milk jars that belong to each person straight . In the same way, the growlers of beer are taken home by the people who brought them after a party.  A friend bought a jug of milk for me the other day in one such container.   After he dropped it off and left I realized that he had not only bought my milk but also paid the deposit on a container that I now had.  I felt kind of guilty.  When was the last time you left a jar of pickles at someone's house and they made sure you got the glass container when they were done with them?  It wierd, buts it kind of nice.  Placing value on more of the things we own I believe makes us increasingly aware of the value of every item.  There is quite a bit of energy that went in to making all that packaging, the price reflects it, but we typically throw away this packaging without a thought.  In a way, this also makes people more aware and responsible for the waste they create.  Even $1.50 on a milk jug is enough to want to bring it back to the grocery store each time and trade it in instead of simply recycling it.

Below are some images of the reusable containers I have collected and the waste that is avoided by using them: