With the temperature dropping, taking 1 gallon bucket showers just results in me freezing to death.  Somethings gotta give. Its a constant trade-off between being clean+freezing, or warm+kinda smelly :).  If I wasn't biking around 12-18 miles a day this wouldn't be so much of an issue....

I've been trying a few different showering approaches, yesterday morning I soaped up with 1/2 gallon water then turned the shower on for another minute (2 gallons) using a total of 2.5 gallons instead of 1.  This way I could at least warm up.

However, I'm realizing that my daily and weekly water-use is going to have to be modified with the seasons.  Maybe May-Oct I use water in one way and from Nov-April I switch this around to allow for more showering water.  Now that I have canned and stored most produce I won't need as much water for washing vegetables. Saving this half gallon a day results in 3.5 gallons a week more than I had before, giving me 14 gallons/ week for showering.  The chart below shows the different water plans (click to enlarge):

With 1 gallon bucket showers 6 days a week and a 5 gallon bucket shower at the end of the week I was using a total of 11 gallons/week.  My new plan is to shower twice a week using the shower head (2 gallons/minute.  This is two 7 gallon showers.  With my current shower head I can take 3.5 minutes showers.  I got a shower flow control valve that will allow me to turn the water off momentarily to soap up without having to readjust water temperature (and waste water in the process).  Putting a timer in the bathroom lets me keep track of how much water I'm using. 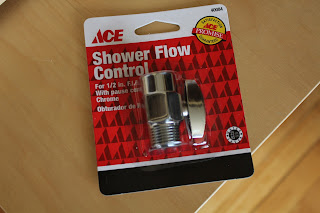