While I biked to and from school/work and to do small errands almost all the time even before this project, whenever I had to go more than 5-6 miles one way I would usually drive.  With small trips and even going the 6 miles to school I can get there by bike just as fast as I could by car.  It takes me 25 minutes to go 6 miles to school versus 15 minutes by car + 10 or 15 minutes to park and walk to the building.  With longer trips,however, I have to remember to factor the time in to get there.  Two trips taken today were longer trips.

A couple friends are taking a 3 month trip around Europe and were having a send off party. The only catch-its in Plymouth (a suburb north of Minneapolis) Surprisingly, we found a route that was almost all bike trails out there. It was a 15 mile ride and took 1:15 minutes. 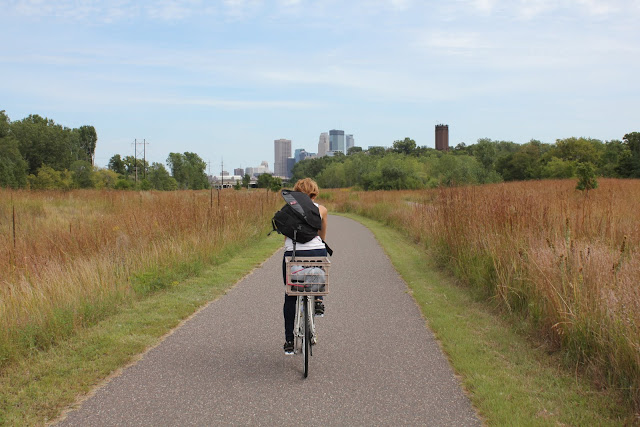 2_Dinner with Tom (8.6 miles one way)
The second long trip of the day was to dinner at my thesis Chair Tom Fisher's (also Dean of the College of Design) house.  This was an 8.6 miles trip, and I made it in 47 minutes.  Tom's wife Claudia has been hearing about this project from Tom and made a special effort to cook as locally as possible.  Every dish they made had at least one ingredient from their garden.  Another advisor on my thesis -Virajita, had her family (two boys) and her parents who are visiting from India there as well.  Claudia had to spend at least 10 minutes explaining all the dietary details of each dish (all vegetarian, some lactose interant and mostly local).  On the menu was:

_cooked kale and tomato salad (all local)
_tabouli salad (herbs from garden)
_beans with fresh herbs from garden
_spinach and cheese enchiladas (local cheese and tortillas and spinach)
For dessert we had a peach and blueberry pie and Virajita's 'ladu' balls.
Soooo good, thanks so much Claudia! 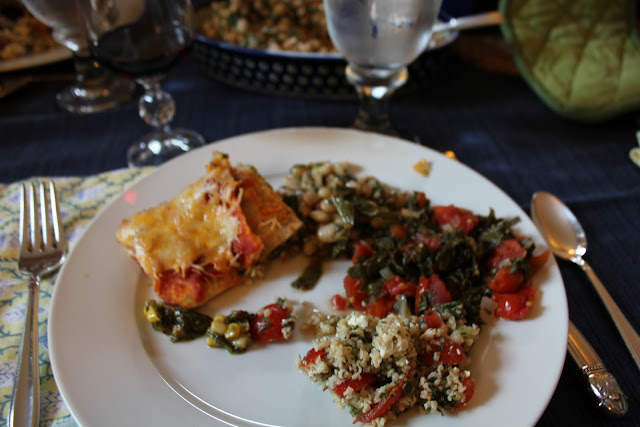 With all kinds of sustainability folk at the table we of course were talking about local foods.  Virajita and Erwin, who grew up in Mumbai talked about how all foods available to them were local.  Without the energy resources we have in the US, food in India is trucked in every day freshly picked from farms on the perimeter of the city.  They bring only what they can sell in a day because it won't keep in the hot climate without refrigeration.  Virajita's 10 year old son Madhav stated matter-of-factly "If you never had oil, you wouldn't ever need it."  This is true.  The problem we are currently facing is that the infrastructures of our entire society are built around a resource that we are rapidly depleting.  Most people throughout the entire world who never came into contact with oil have totally different infrastructure and won't be facing nearly the extent of crisis that we will in the coming years.
Posted by Molly Eagen at 9:44 AM