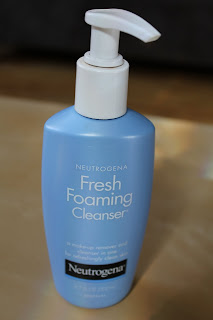 I've started researching ingredients in cosmetics, soaps, lotions and other beauty products to find where petroleum-based synthetic ingredients are.  In the same way that preservatives have allowed for foods to come from all over the world, the same is true with bath/body products.  While we have the advantage of our lotions and soaps lasting a year or more and coming from far corners of the world, the downfall is that many of these ingredients are toxic and cause cancers as well as accumulating in the environment and eventually ending up in our drinking water.  Many of these products are deemed "safe" for our use because they are in small quantities and aren't to be used on broken skin.  However, despite the apparent safety of toxic ingredients, the fact remains that our skin is only 1/200th of an inch thick, the largest organ in our body, a porous surface, and whatever you put on your skin CAN get into your bloodstream. When you think about it that way, whether "safe" or not, I wouldn't put anything on my skin that I wouldn't eat.  What is confusing about determining what ingredients are petroleum-based is that almost everything is classified as an "organic compound".  While I would like to assume that if something is listed as an organic compound it isn't petroleum based,  petroleum itself is really an organic compound.  Petroleum is referred to as "ancient sunlight" in Thom Hartmann's book The Last Days of Ancient Sunlight.  It was formed by decomposing plant matter which was trapped inside the earth's crust for millions of years.  While we consider it an unnatural compound now, it is really ancient decomposed plants...

"An organic compound is any member of a large class of chemical compounds whose molecules contain carbon. Compounds that are prepared by reaction of other compounds are referred to as "synthetic". They may be either compounds that already are found in plants or animals (semi synthetic compounds), or those that do not occur naturally. Natural compounds refer to those that are produced by plants or animals. Many of these are still extracted from natural sources because they would be far too expensive to be produced artificially. Examples include most sugars, some alkaloids and terpenoids, certain nutrients such as vitamin B12, and in general, those natural products with large or stereoisometrically complicated molecules present in reasonable concentrations in living organisms. Most polymers (a category which includes all plastics and rubbers), are organic compounds" (Wikipedia).


In the same way, 'synthetic' doesn't necessarily mean petroleum-based. So I'm struggling to find out how to trace these compounds back far enough to understand how they are made,  this is a process that has catalyzed into an all-day research endeavour just trying to find out what the ingredients on the back of my face wash mean.  I realized pretty quickly how long this process could take and am going to go over just the ingredients in one product first.  While many ingredients have similar names, they are often VERY different compounds. I have starred ingredients that I know are petroleum-derived, others may be, but I haven't confirmed...
For anyone not aware, ingredients listed on the back of all products (food and beauty products) are listed in order of quantity in the product.  The first ingredients have the highest percentage in the products and the last ones may only have a small percentage of the product.  A few resources I have been using to find out what these ingredients mean are:

So, on to the face wash... the ingredients listed on the back are:

lauryl glucoside/decyl glucoside-a surfactant (lower the surface tension of a liquid, allowing easier spreading, and lowering of the interfacial tension between two liquids, or between a liquid and a solid. Surfactants may act as: detergents, wetting agents, emulsifiers, foaming agents, and dispersants.(wikipedia))

*PEG 120 methyl glucose dialeate - Polyethelene Glycol  (number following indicates the molecular weight) and the "methly glucose dialeate" means it is chemically attached.  Polyethylene is the most common form of plastic, and when combined with glycol, it becomes a thick and sticky liquid.  "In cosmetics, PEGs function in three ways: as emollients (which help soften and lubricate the skin), as emulsifiers (which help water-based and oil-based ingredients mix properly), and as vehicles that help deliver other ingredients deeper into the skin." (http://truthinaging.com/face/what-is-it-pegs)  Although fairly safe if not used on broken skin, because PEG's help other ingredients penetrate into the skin, if there are dangerous other ingredients in the product, the PEG will help those penetrate into the bloodstream.

Tetrasodium EDTA - EDTA stands for 'Ethylenediaminetetraacetic acid'. Yeah, woah.  It is a water softener and preservative.  A persistent organic pollutant, “Widespread use of EDTA and its slow removal under many environmental conditions has led to its status as the most abundant anthropogenic compound in many European surface waters … and has emerged as a persistent organic pollutant” (Wikipedia).

So there you have it, as you can see, there are all kinds of preservatives and additives in this face lotion (and beauty products in general) which allow it to have a long shelf life, which allows it to be made anywhere in the world and shipped, packaged, shipped, stored and shipped again to a store where it can sit on the shelf until someone buys it to be stored in their own home for a year or longer.  Products like this are dependant upon oil for many phases of transportation, as well as energy intensive manufacturing of chemical additives, and lastly, petroleum is actually in many of the ingredients themselves.

Many of the ingredients are included to help cleansers foam and create the right kind of consistency for spreading.  Even products which are considered more "natural" and leave out some of the unnecessary chemical additives still contain a number of preservatives that allow it to be shipped around the country and stored for long periods of time.

So how do we wash our faces in a no-oil world? Or wear deodorant? Or lotion our hands? Or clean ourselves? The kinds of products that would be available without oil would likely be sourced locally because they would have minimal or no preservatives and would have a short shelf life (a few weeks to a few months). They wouldn't have any toxins, cancer-causing ingredients found in most products which help them foam up or preserve them. We would likely make more of our own products due to the short shelf life and convenience of it. I've started making my own products from recipes found in Casey Kellar's book, Natural Alternatives for You and Your Home. 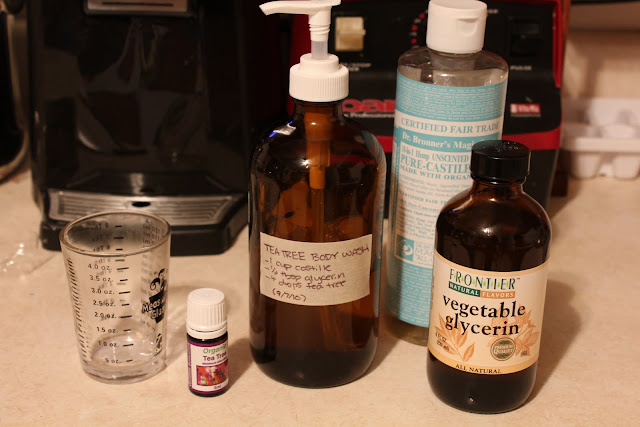 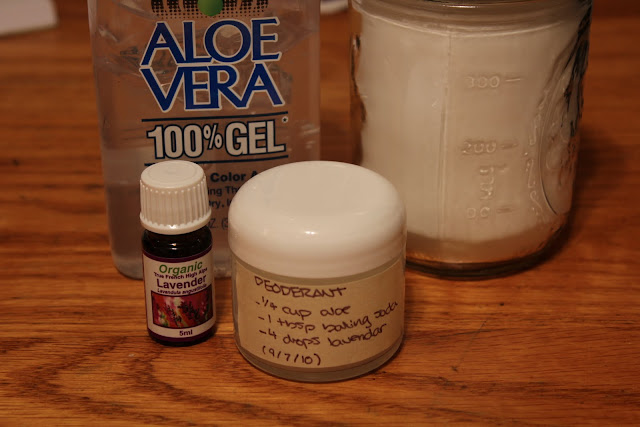