I moved all the vegetable seedlings that made it into 1 gallon pots today.  So far in pots I have growing: 3 bell peppers, 1 jalapeno, 1 lemon balm (with 2 sprouts), 1 basil, 1 storage bin of cilantro (3 sprouts).  I'm also beginning to realize that the soil depth that I have available in the seed flats (only about an 1.5" isn't going to be enough for the microgreens.  The recommended depth is 3-5" and I think once the plants get bigger they won't be able to hold themselves up with only an inch of root depth. I transplanted the half of the flat that was collard greens into some storage bins I had.  I'm not sure how well they will do transplanted because they were planted so densely that moving them was kind of difficult (as you can see in the picture) I also started another storage bin (about 6"x6"x1') of new collards to germinate so I'll have a continuous supply of greens as I eat them.

I also measured the electricity usage of my mini fridge today.  I plugged the Kill-A-Watt meter in for 24 hours to get a reading of one day of use.  It came out to using 22.63 watts/hr, over 24 hours using 0.543 kWh/day.  The big fridge uses 68.1 watts/hr (1.68kWh/day).  This means that the mini fridge is using less than a third of the energy of the big one!  I was surprised about this because I didn't think those little fridges were very energy-efficient, but I'm able to save 1.087 kWh/day now using it.  The problem is that I have to be more picky about what gets refrigerated now that I have significantly less space.  Apples, pears, yeast, onions and peppers are no longer refrigerated.  Instead I have to leave room for the things that absolutely need refrigeration; milk, butter, sunflower oil, eggs, cheese, maple syrup, leftovers.  I think we generally over-refrigerate food.  While most things will last longer being refrigerated, some foods actually do better without refrigeration.  I've started leaving all greens and herbs in glasses of water on the counter instead of putting them in the fridge and they seem to last longer. 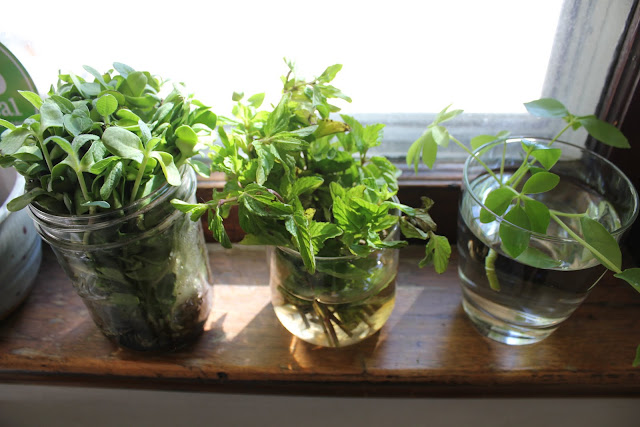 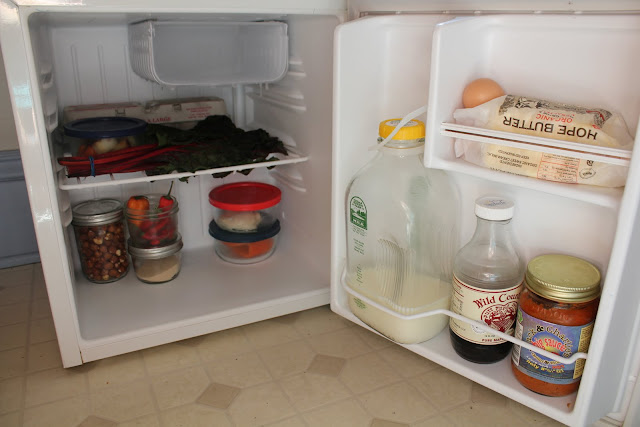