While I recently discovered a 'local' pasta (actually from North Dakota, but defined as local at the grocery co-op), a friend and I decided it would be interesting to make our own.  She has a hand cranked pasta maker that can make spaghetti and fettuccine, we opted for the fettuccine.  We realized quickly that pasta making is (1) not a one or two person job but needs MANY hands, and (2) takes a REALLY long time.

The recipe we used for fresh pasta:

1/1/2 cups white flour
1/4 cup durum semolina flour (recommended to use a 1:4 ratio of semolina to flour when first starting)
3 eggs
1 tsp of salt
(makes about 4 servings)

This is a really dense, tough dough, hard to mix, but once it is mixed it can be rolled extremely thin and pulled without breaking (that's the semolina's job).  We rolled it out to create something that looks like a cows tongue (pictured) and then went to the machine.  The machine has 9 settings of thinness, you start at the widest setting (9) and put the pasta through over and over until it is really thin.  The length of our dough got bigger as it got thinner until it was about 3-4 feet long, when we would cut it in half or thirds before putting it into the fettuccine cutter.

Once cut, the pasta has to be separated slightly and dried.  Fresh pasta is usually made with eggs and can last only 3 days if refrigerated.  Dry pasta is not simply fresh pasta that has been dried, it is made without eggs, making it really hard to make by hand and probably best left to industries with specialized machinery.  Dry pasta can last up to 2 years.

Once we finished the pasta making and everything was on racks to dry (including my clothes drying rack) we made about half of it (we had doubled the recipe).  You only need to cook the pasta for 1 minute when it is fresh. It is already soft.  This guy has some rules about pasta cooking: http://www.skilletdoux.com/2006/02/the_ten_command.html.

We made a fresh Alfredo sauce with cream cheese, Parmesan cheese (both local), some garlic butter I made before and milk.  SUPER good.  The fresh pasta absorbs the cream sauce and makes it delicious (and really fresh tasting).  Tons of work, but, in the end, really fun to make with a bunch of people.

Making pasta made me think about the traditions behind cuisines that exist around the world that revolve around many people cooking food for a long time.  Pasta is obviously a tradition central to Italian culture, it is actually written into their laws how to properly make pasta.  This article talks about the history of eating and how various cultural cuisines came about. (http://www.unu.edu/unupress/unupbooks/80632e/80632E02.htm)

"Ecologic and economic studies within anthropology have considered the relationship of food choices to the foods available in particular environments. Biocultural anthropologists have tried to show how cultural habits, including food beliefs and practices, affect the biological well-being of human populations or social groups in the short run and the evolution of human biological populations in the long run. Conversely, biocultural anthropologists have also attempted to determine the relationships between biological aspects of particular environments or genetic characteristics of particular populations and their cultural beliefs and practices, in order to show interactions and interrelationships between biology and culture over both the short and the long term."

The reasons we eat what we do (and the reasons so many different cultural cuisines exist) are not arbitrary, but evolved out of; what foods were available in each region, economic factors, medicinal properties of food, taste standards....Like I mentioned in an earlier post about Indian foods, their traditions of eating food are based on how to prepare food in a tropical climate to kill bacteria and keep it from going bad.  It was mentioned to me before that the most healthy way of eating is to eat within a particular cultural cuisine because each cuisine has gone through thousands of years of trial and error to end up with a diet that is very nutritionally complete.

This is interesting to think about in a post-cheap-oil context because our 'traditional cuisine' in America is a mixture of HUNDREDS of different cuisines.  This 'mixing' of cuisines allows us to enjoy foods from cultures around the world and make them our own, however, it disconnects us from the reasons for eating each of the foods we do.  The ability to transport food from around the world easily has completely changed our diet and ideas of what is traditional food.  I would imagine that in a era without cheap transportation fuels, new, adapted versions of cultural cuisines would reappear.  Only being able to eat local foods, people would be more connected to what can be grown in their particular region and design their diets around those ingredients.

Doing this project, I feel as though I am unraveling what this new Minnesota climate cultural cuisine will be.  Although this diet this is influenced by traditional Midwestern cooking as well as Native American foods (because both diets were built around what was available locally), the post-petroleum cuisine will be a hybrid between those cuisines and a new cuisine which is influenced by our time spent eating cuisines from all over the world and learning from them. 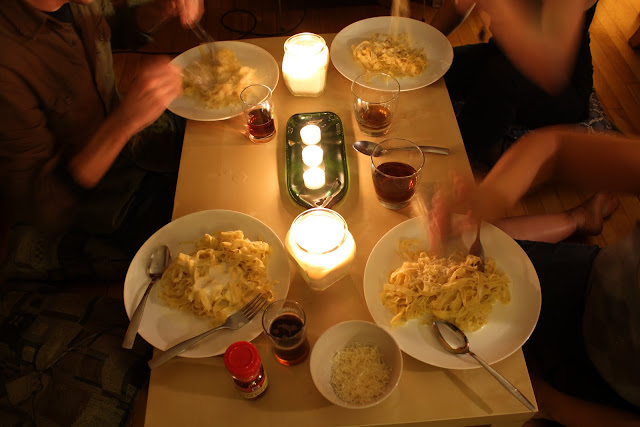