DAY 38_CAT ON COMPOST+WORMS ON FLOOR

Quille (the cat) has taken a liking to the compost.  She started sniffing it out a few days ago, we thought she might have been hearing the worms inside (you can hear them moving around if you listen really closely).

What started as sniffing turned into a mysterious indentation found on the compost each morning.  The compost is covered with a cloth sheet to allow for ventilation and bungeed down around the edges.  I finally caught her using the compost as a hammock a few days ago.  I think she likes it because it is comfortable (suspended) and is warm.  The compost is actually getting large enough that is creates some heat as it decomposes. 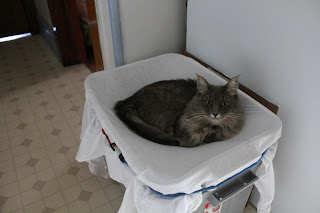 Regardless, cat on the compost isn't an ideal situation, one of these days she might actually fall in which might end up in compost catastrophe (or at least a mess).  The solution to this was to replace the rubber lid on the compost again.  It is easier to get in and out of the compost this way (don't have to undo bungees every time) and there is less quille vs compost danger.  I am planning on drilling some holes into the lid and sides to allow for ventilation again and hopefully won't run into the same mold problems I had.

The other reason for putting an easier-to-get-to lid on again is we have been infested with little gnats.  Part of this I'm guessing is due to food sitting in the kitchen composter for a day or two before being added to the bin.  The kitchen composter has a charcoal filter which eliminates odors but is not air-tight so bugs can still get in.  The new plan was to have my roommates dump scraps directly into the bin, and, once a day I will dig a hole in the bin and bury the compost.  When the food isn't exposed to air, gnats are not attracted to it.  Hopefully, this will be a better solution than putting food in the garbage even because it will (almost) always be buried in worm dirt and pests won't be attracted to it.

I had the rubber lid on top (no holes yet) for a few days and today came home to find that worms were trying to escape!  John Steingrabber (compost expert from previous post) had mentioned to me that he sometimes ends up with worms on the floor as well.  He explained that the worms try to avoid light but aren't really smart enough to tell where the light is coming from.  Now that the whole bin is really dark inside the worms have begun to climb up the sides of the tub and are ending up (for whatever reason) on the outside of the tub.

I noticed this the first day with the lid on, but the worms escaped in full force today.  My roommate Karli was the first one of us upon the scene.  She heard Quille meowing like a crazy cat and came in the kitchen to investigate.  According to Karli "there were handfuls of worms all over the floor!"  They had bunched themselves up into clumps or balls of worms and were all over the floor and on the outside sides of the tub.  Karli wins a gold start for saving the worms which hadn't dried up yet, and trashing the ones who were already dead from being too dry.    By the time I came home that night there were, again, worms on the sides of the bin and a few on the floor, and the handles of the bin were FULL of worms.  Why are they doing that?  I only found out later that the worms had been much worse than what I saw. Gross.

We can't really put the bin outside because the worm's won't survive under 55 degrees, and it is much more convenient to have it in the kitchen.   I am going to try some different scenarios of drilling holes in the lid and sides to see if it deters worms from climbing up the bin.  On the one hand, the space should be dark enough that worms go to the top of the compost.  This would minimize the amount of stirring that needs to happen.  On the other hand, there needs to be enough light to let worms know not to go there.

This is really a design problem.  Kitchens in an era where waste is too expensive/energy intensive to haul away in large quantities will demand that organics be dealt with within each building.  This wouldn't be a difficult thing to accommodate if it was built into our homes as a separate and dedicated space.  Because worms are afraid of light, they can be contained by having strips of light at the borders of the 'compost space'.   The space would need to be adjacent to the kitchen for easy access and would need to be conditioned so it wouldn't get too cold or hot.  It would be interesting for this space to serve as a 'bridge' between the grow table area on one side and the kitchen on the other.  Organic food scraps go in on the kitchen side, are composted by worms, and come out as finished compost which can be mixed to create rich, nutritious soil on the grow table side.  Designing in this way makes the hypothetical cycle waste to food to waste an actual physically built part of the house.  Incorporating the changing activities of homes in a post-cheap-petroleum world accommodates these activities in an effortless manner, similar to turning on the tap or pulling your car out of the garage. 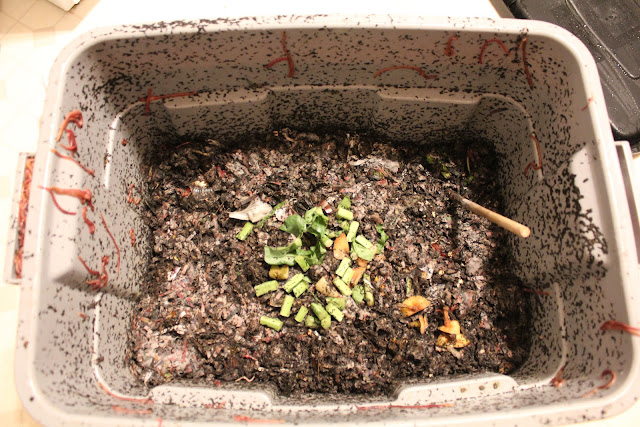 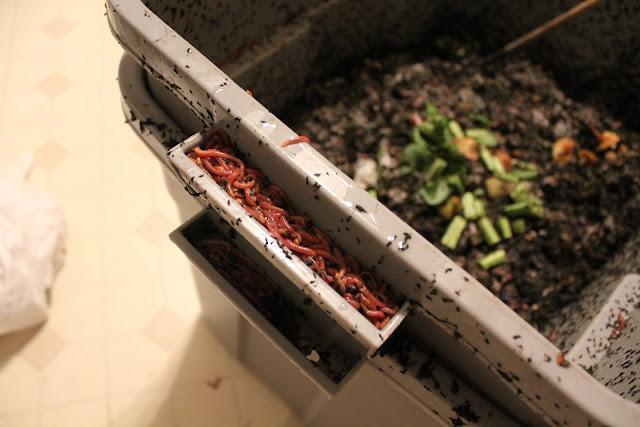 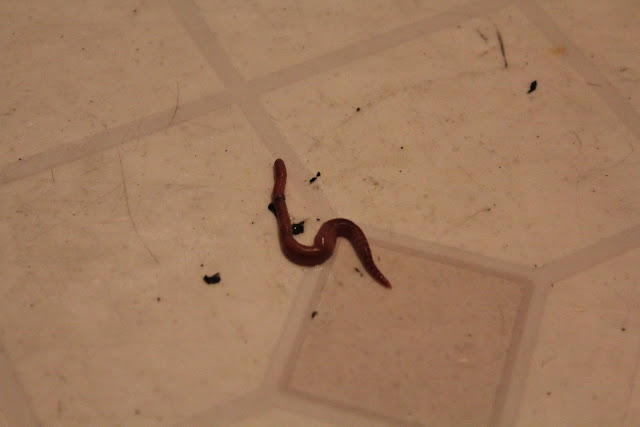