The time has come, snow is here.  What was predicted to be a few inches that melts on the ground turned into about 3 of snow that definitely isn't going anywhere, complete with a Snow Emergency Day.  While it is nice not to be driving around in the craziness of the first snow (there was something like 1000 accidents), I'm not sure biking is a whole lot safer (although definitely faster) in these conditions. 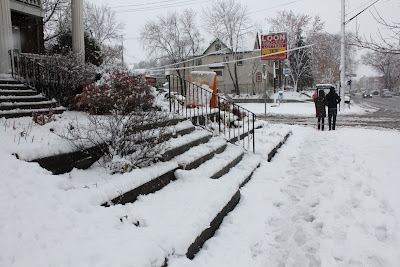 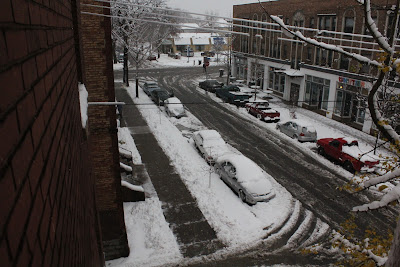 The City of Minneapolis has a page on their website specifically dedicated to winter biking
http://www.ci.minneapolis.mn.us/bicycles/WinterBikingTips.asp  What may surprise summer bikers is that 50 of the 60 miles of bike trails throughout the city get plowed just like city streets.  According to some friends that are hardcore winter bikers, the bike trails are usually the first to get plowed.  As it should be :)

The last two winter's I've lived in this ice-box of a city before this project I would bike until the end of October, and have never felt the need to tempt fate on a bicycle when it's icy and freezing outside.  However, the more I meet people who bike almost all year round, the more it seems like a possibility even in Minnesota (if you have the right equipment and clothes). Census data shows 4,800 residents of Minneapolis regularly commute to work on a bicycle. The number for the entire metro is 9,700 bikers. A local group called Transit for Livable Communities estimates one-third of those biking enthusiasts continue commuting to work during the winter.

Here is a funny video of winter bikers:
http://www.startribune.com/video/12962607.html

http://www.icebike.org/ represents bikers all over the country who bike through the winter.  Who are these people? In their own words:

"Most of us are just ordinary folks, who get this addiction to bicycles that simply will not live within the bounds of a summer.  Others just don't want to spend the cash for a car and all the costs that come with motor vehicles.  Some of us have serious personal commitments to being car-free, others have temporary problems of liquidity, and others of us just like cycling way more than any rational person should."

Cheers winter bikers, I'll join you for at least the next week.

Use 311. If you see a bicycle-related problem which involves plowing, shoveling, signing, or another traffic concern, call 311. The City relies on the public to flag problems. If you live outside of Minneapolis, call 612-673-3000   A Minneapolis bikeway maintenance responsibility list is available for more direct call routing.
Posted by Molly Eagen at 8:55 PM